Tips for Planning a Writing Retreat

When I decided to host a writing retreat I searched online to see if there was any advice for planning one. I found tons of articles by writers with tips about arranging writing weekends for themselves and possibly even sharing with another writer friend but I did not find much about planning a larger retreat. It turned out not to be too hard but here’s a few things my experience taught me. 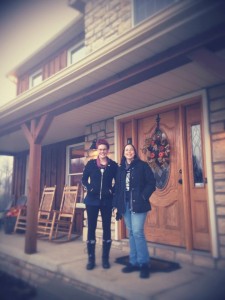 Probably the most important thing is to pick a good place to hold your retreat. We splurged and went with a luxury lodge, and it was perfect. Bourbon Ridge Retreat had charm and lots of space, a kitchen and table big enough for the whole group to eat together and even a comfy theater room. There was enough space so that people could always find a quiet nook to work in. The comfortable surroundings set the mood for the entire weekend.

The meals are the next most important thing to plan for. Because our retreat was only a couple days we made sure that it was not necessary to leave the lodge for meals. I tried to plan meals that would not involve a lot of preparation. I made soup and chili in advance and froze it. I also brought spaghetti, sauce and frozen meatballs for a big spaghetti dinner. Both of these meals worked well and were satisfying in the cold weather.

I had not often cooked for a large group and found that everything from boiling the water for the pasta to heating soup in the microwave took a lot longer than I expected. Take this into account and start early on meals. 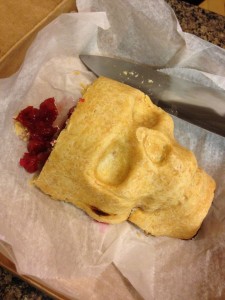 Ask guests to bring their favorites

Although we planned to provide food for the whole weekend I also suggested that if guests had favorites or things they couldn’t live without they should bring them. This turned out to be great because lots of people brought things to share. We had everything from skull-shaped pies and home-brewed mead to German apple birthday cake, a tin of butter cookies, leftover Halloween candy and home made two-headed gingerbread men. Although I believe we had enough food without these extras they were fun added variety to the other snacks we’d brought.

Finger food is the best

It was hard to choose what to bring and some things we brought back unopened. I noticed that the most likely food to be eaten was whatever required the least work/preparation. Meat, cheese and cracker trays were quickly devoured. Make it easy on yourself and bring lots of food that can just be out on the counter for people to snack on.

Ideas and options instead of a strict schedule

I didn’t want to pack the schedule full of events and keep people from writing but also hoped that people would get a chance to be social too. So we kept the weekend very free-form. In the end I think it could have had a more set schedule but not too much more. We brought along Cards Against Humanity which was a good thing to have and one of the attendees organized an impromptu reading which everyone participated in and that turned out very well. We had also hoped to do smores and some hiking but the weather nixed both of those ideas. People also made use of the hot tub. It worked best to have informal activities and let the attendees guide the schedule. 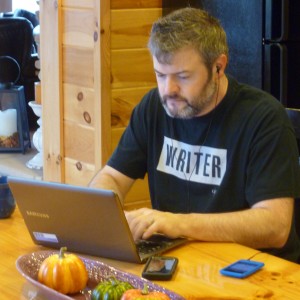 I had worried that with so much going on people might not find the time to write but trying to make a schedule for writing was even worse, some people might prefer writing in the morning, some might only write after dark. In the end I did not schedule any specific writing times but noticed that almost every person made time to do their writing throughout the weekend. Some went off to their rooms, some just found a comfy spot and put on headphones. This way each person was in charge of their own writing and could write at the best time for them.