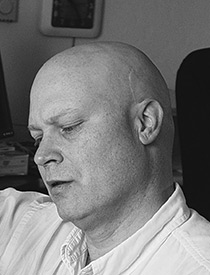 Alan M. Clark grew up in Tennessee. He is most known for his work in illustration, which appears in books of fiction, non-fiction, textbooks, young adult fiction and children’s books. His awards in the illustration field include: the World Fantasy Award and four Chesley Awards.

His fiction has appeared in magazines, anthologies and a collection released by Scorpius Digital Publishing. Siren Promised, his Bram Stoker Award-nominated novel, written with Jeremy Robert Johnson, was released in 2005. His two book series with Stephen Merritt and Lorelei Shannon, The Blood of Father Time, a dark time-travel fantasy, was published by Five Star Books in 2007.

Mr. Clark’s publishing company, IFD Publishing, has released six books, the most recent of which is a full color book of his artwork, The Paint in My Blood. He and his wife, Melody, live in Oregon.