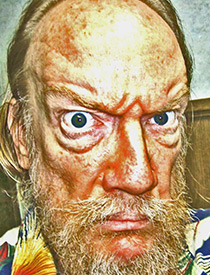 Tom received his novelist’s calling at the age of nineteen. He climbed into the moonlit mountains around his hometown, where he got an unambiguous vocation with physical symptoms and everything, just like Martin Luther in the electric storm. He fucked permanently off from America in 1985, moved to Red China, and has lurked around the left rim of the Pacific ever since, in a successful search for sinecures that steal virtually no time and absolutely no mental energy from his writing.

Tom’s prose shares the legendary pages of London’s AMBIT Magazine with those proto-bizarros, J.G. Ballard and Ralph Steadman. His first nonfiction book is Fission Among the Fanatics (Spuyten Duyvil Press, NYC, 2007). A variation of his novels have been nominated for the Editor’s Book Award and the New York University Bobst Prize, and one was a finalist in the AWP Award Series in the Novel.

Reviews and excerpts, a couple hours of recorded readings, plus links to Tom’s essays in Salon.com and other such high-tone swanky magazines, are at tombradley.org.