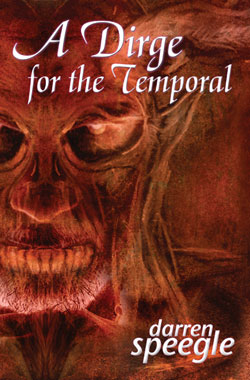 Prepare for a decadent feast. A Dirge for the Temporal, Darren Speegle’s second collection of fiction, bursts with sensations. Like Baroque architecture, plush velvet furnishings or the richest chocolate truffle dessert, Speegle’s prose delights all the senses.

This collection heralds the return of the subtly crafted horror tale. A Dirgelingers on the dark mystery of the supernatural, creates the giddy feeling of fear mixed with excitement, that only comes from partial revelations, things half-glimpsed and misty.

Like H.P. Lovecraft or Edgar Allen Poe, Speegle’s stories belong to the twilight hour, just after the glorious reds and golds of sunset have slipped away giving warning that total darkness is quickly approaching. Old world legend and gothic sensibilities lurk behind every corner. A world of aching beauty and impending doom awaits. Speegle’s work is a rare treat to be savored.

What They’re Saying About A Dirge For The Temporal

“Speegle has written a wide range of stories from the creepy and bizarre to the disturbing and brutal. … Readers of mainstream horror will find some occasional reading speed bumps along the way as A Dirge For The Temporal includes a number of experimental literary works. There are a number of horrifying stories in A Dirge For The Temporal which makes it a good addition for public libraries with a large and varied reader population that might look to experiment in more literary horror. ”
—Monster Librarian

“This is a collection of very well written and well crafted short stories. Speegle has a deft mind and an appreciation of all things dark and terrible. Unlike many horror writers who seem to wield an axe to get their terror into your psyche, Speegle’s deft and almost surgical grace with his fiction cuts like a scalpel, leaving far deeper wounds.”
—Dark Discoveries

“Two things you must possess in order to enjoy Darren Speegle’s collection, A Dirge for the Temporal. The first would be a love of language. The second, a hunger for the surreal….This wonderful collection is comprised of more than thirty stories and poems which cover all the genres of horror, fantasy, and sci-fi and pretty much every sub-genre in between. And some of the tales are simply unclassifiable. From what he has displayed here, Darren Speegle is obviously a writer to keep an eye on. AndA Dirge for the Temporal is a collection that should be on the shelves of dark fiction fans everywhere.”
—SFReader

“If you prefer your fiction grounded in ultra-realism, you’ll not likely appreciate these exercises in bizarre obfuscation. But if you’re into characters who speak as if they hold arcane knowledge, whose actions reflect a grand design not immediately obvious to most, or whose principal trait may well be madness, then A Dirge for the Temporal will fit the bill nicely and balance out the more typical horror fare.”
—William D. Gagliani, Chi-Zine

“A feast for the horror fan who prefers his fiction rich with imagery, symbolism, and beautiful prose. Though thoroughly modern in tone and subject matter, the stories collected in A Dirge for the Temporal more than casually reveal the literary influence of such masters of the form as Poe, James, and de Maupassant.”
—Drew Williams, Flesh & Blood

“You’ll find atmospheric and hallucinatory stories from a writer of considerable poetic power. Speegle’s stories are eerie rather than extreme and more subtle than splat-filled…There’s a good chance you’ll be hearing more about and from him in the future.”
—Paula Guran, Cemetery Dance

Speegle is a writer of vivid prose snapshots that will linger in the mind long after the book is put aside. His work is recommended to connoisseurs of the weird and unusual.”
—The Third Alternative

“There is fantasy here, and horror to be sure, but there is also wonder, and a beauty of language that a lot of the fiction attributed to those genres lacks…there is a lot of bang-for-the-buck between the covers. A Dirge For the Temporal is a strong collection of surreal, literate fiction. Highly recommended.”
—David Niall Wilson, Cemetery Dance

“You don’t just read about the places, you experience them, the people, and the entities that inhabit them. Darren Speegle has the ability to capture your soul, and slowly release it back to you, with merely a few scars. It’s more than worth the read, it’s worth the euphoria your mind senses when you’ve turned the last page.”
—Midwest Book Review

“Darren Speegle writes with the beauty of a shotgun, the delicateness of a razor, and the symphonics of a scream. His work is moody, evocative and always disturbing. He is, quite simply, one of the consistently best up-and-coming horror writers in the business. Do yourself a favor and read him now.”
— Brian Keene, Bram Stoker Award winning author of The Rising

“Darren Speegle is a rare combination of classic storytelling and modern edge. He is literate and slick, myth’s wolf and wet ruby poet.”
—Charlee Jacob, author of Haunter and Dread in the Beast

“Haunting, passionate, mesmerizing…my first Speegle experience, and I was truly heightened by his poetic, compassionate prose. Speegle does not enlighten horror; rather, he enlightens literature, as both concept and emotion, and his torch burns as bright as any who came before him. Speegle for president.”
—Ronald Damien Malfi, author of The Fall of Never 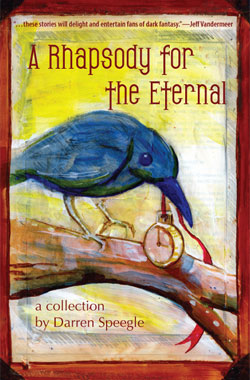