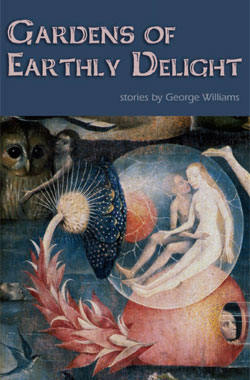 A modern alchemist falls prey to a magic darker than his own. The Antichrist’s mother goes on the run in Spain. In his garage a physicist builds a tribute to his beloved. An old man and his mule tour the roadside wastelands of the Gulf of Mexico. Sixteen stories span the world from Texas to Paris by way of Damascus. Filtered through the lens of the strange and uncanny, everyday events take on a sinister aspect. These gardens are delightful, but a serpent lurks behind each blushing fruit, beckoning the reader into the shadows.

Ever seen a man crucified?

Gardens of Earthly Delight reaches beneath the surface of simple stories and casts them in an ominous, tragic-comic light. Heists, revenge, a trip to the casino, author George Williams takes all of them and makes them new, exotic and not a little bit disturbing.

What They’re Saying About Gardens of Earthly Delight

“Gardens of Earthly Delight is a trippy little book.…Williams paints a grotesque picture of modern America, one filled with witches and terrorists, con men and succubi. Actually, I don’t know there there are any actual succubi in these pages…but it sure feels like there should be.”
—Popmatters

“George Williams writes with an electric energy, unpredictable inventiveness, and deft ear for dialogue that make him one of the most exciting and compelling writers of his generation.”
—Richard Burgin, author of Rivers Last Longer and Shadow Traffic

“Very rarely do you find an author who will take familiar themes and portray them in a new light. Even more rare are the appearance of original tales that defy comparison to what has come before.…George Williams has proven himself to be possessed of an awe-inspiring literary green thumb.”
—Emory Barrett Pueschell

What They’re Saying about Degenerate

“Gritty, tender, violent, urgent, and told with an irresistible breakneck velocity,Degenerate is a story of desperate characters streaking through a desperate country. With his first novel George Williams has inserted himself into the pantheon of American visionaries somewhere between Cormac McCarthy and Richard Price”.
—Adam Davies, author of The Frog King and Mine All Mine

“George Williams’ Degenerate makes broke-back poetry out of desiccated American landscapes, and argues persuasively for he sanity of an off-kilter existence. A rollicking, bracing, and wholly originally debut.”
—Tracy Daugherty, author of Woman in the Oil Field and What Falls Away

“The term ‘original voice’ is over-used and misapplied to many fiction debuts that are really nothing new. Not in this case. Degenerate is like nothing you’ve ever read. Incendiary and exhilarating sentences shred metal; the story is crazy, captivating and compelling. George Williams is a brilliant writer, and this is a brilliant book.”
—Larry Fondation, author of Common Criminals and Fish, Soap and Bonds 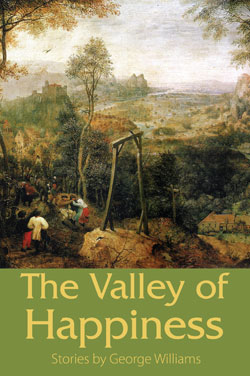