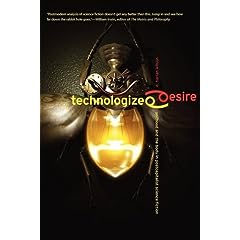 Here’s the description:
In TECHNOLOGIZED DESIRE, D. Harlan Wilson measures the evolution of the human condition as it has been represented by postcapitalist science fiction, which has consistently represented the body and subjectivity as ultraviolent pathological phenomena. Operating under the assumption that selfhood is a technology, Wilson studies the emergence of selfhood in philosophy (Deleuze & Guattari), fiction (William S. Burroughs’ cut-up novels and Max Barry’s Jennifer Government), and cinema (Army of Darkness, Vanilla Sky, and the Matrix trilogy) in an attempt to portray the schizophrenic rigor of twenty-first century mediatized life. We are obligated by the pathological unconscious to always choose to be enslaved by capital and its hi-tech arsenal. The universe of consumer-capitalism, Wilson argues, is an illusory prison from which there is no escape-despite the fact that it is illusory.