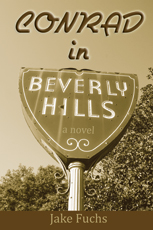 Just put up a page for one of our upcoming releases, Conrad in Beverly Hills by Jake Fuchs. I’m getting ready to send review copies out now. here’s the synopsis:

Professor Conrad Keppler is flummoxed by Kate, a colleague he likes who has shown an interest in him, but he doesn’t know how to respond.  Even more distressing is that his childhood, which he thought safely behind him, has begun to encroach on his daily life. Memories of a misconceived effort to rescue his screenwriter father from the evils of Hollywood, and thereby merit the man’s affection, return to him vividly. Life in Beverly Hills with his egocentric father and a mother who—in Conrad’s memory, at least—constantly devoted herself to shushing him lest the genius be disturbed, has left him unable to connect with Kate. Then Conrad comes across an unfinished story of his father’s that forces him to examine his past and challenges him to move forward.

An unusual perspective on the movie business in the 1950s and 60s and on present day academic life is an often humorous part of Conrad in Beverly Hills, the story of a man’s renewal through his own imagination.