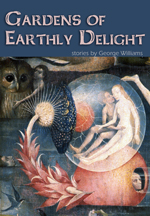 "In his first short story collection, Williams (Degenerate) shows a darkly comic sensibility more akin to that of the filmmaking Coen brothers (think Barton Fink) than to more obvious literary influences. His swift, choppy dialog (no quotation marks), quickly shifting scenes, and peculiar interest in archaic religious weaponry (armor, swords, and shields) make for a wild ride from story to story. The narratives are filled with gleefully incongruous details. In "Texarkana," for instance, a couple playing for high stakes at the Horseshoe Hotel and Casino read Proust at night, while the World War I veteran looking to buy himself a car from a Texas dealership ("Alamo Ford") finds that his pocket money instead buys him a mule. These stories have an element of the Southern gothic that may remind some readers of Flannery O'Connor; "Arkadelphia" brings to mind Shirley Jackson's famously terrifying lottery. VERDICT Recommended to adventurous readers, who will surely enjoy Williams's wildly irreverent inventions."—Sue Russell, Bryn Mawr, PA"