1. Farley's Bookshop in New Hope, PA began featuring indie presses including RDSP. The response from customers at Farley's has been tremendous and they now sell more of our titles than any other brick and mortar bookstore

3. Fleeting Pages took over a gutted Borders bookstore in Pittsburgh for one month to sell indie books including RDSP's. John Edward Lawson traveled there to check it out and lead a flash fiction workshop.

4. The Go Love book tour launched to a packed house at The King's English Bookshop and took Michael Gills to many more stops in the south.

5. RDSP opened to submissions for the first time in 6 years and discovered a lot of amazing talent including Leland Pitts-Gonzalez whose novel, The Blood Poetry we signed for 2012 release.

6. A Darker Shade of Green had an amazing launch at Bluestockings Bookstore.

7. We met Jason & Heidi Miller at the Frostburg Small Press Fest. Not only did we sign Jason to a 5 book deal but we gained two steadfast friends whose energy is rejuvenating and contagious.

8. 14 current and back catalog titles were released in ebook editions.

11. Airplane Novel by Paul A. Toth was included in a USA Today Best Indie Books of 2011 list. 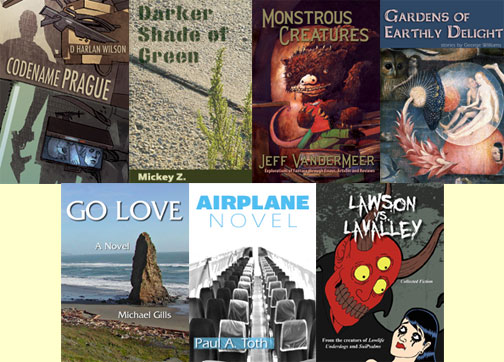