BOOK DEAL: Daniel Kraus – THE GHOST THAT ATE US

RDSP to Publish The Ghost That Ate Us: The Tragic True Story of the Burger City Poltergeist by New York Times best-selling author Daniel Kraus in 2022

You remember this news story, don’t you? Maybe you had read it on Twitter, or a friend sent you a news clip. Maybe you watched an episode on it after flipping through your television one night you couldn’t sleep. True crime fanatics and paranormal investigating enthusiasts certainly will know because they probably haven’t had much sleep since learning about it.

Which story you ask? You’ve read and watched so much true crime these days.

On June 1, 2017, six people were killed at a Burger City franchise off I-80 near Jonny, Iowa. It was the bizarre end of nine months of alleged paranormal activity at the fast-food joint— events popularly known as “the Burger City Poltergeist.” The story inspired Facebook memes, Twitter hashtags, Buzzfeed listicles, and more. Prior to the tragedy, the events were featured on the Travel Channel’s Spectral Journeys and lampooned on The Daily Show with Trevor Noah. After the tragedy, Starz produced t 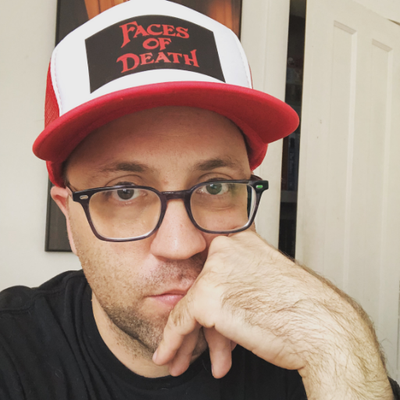 he documentary Blood at Burger City.

Ah…, you shudder… that one! Well, there’s more.

Now, Raw Dog Screaming Press is pleased to announce that 2022 will see it bring the story to readers in The Ghost That Ate Us: The Tragic True Story of the Burger City Poltergeist by New York Times best-selling author Daniel Kraus.

Kraus dug through the messy controversies and pulled together strands of evidence to create the “definitive story” of “the most exhaustively documented haunting in history.” It will include footnotes, quotes from news reports, analyses of security-camera footage, and crime-scene photos… and, for the first time ever, interviews with living survivors of the tragedy, some who may lead him down a dangerous path.

The Ghost That Ate Us is unlike any book before it, even though it will fit well on any true crime lover’s shelf. It is accessible, clever, fun, heartbreaking, and scary, too! RDSP is thrilled to add it to its hub of published works, feeling it will fit right in among its many iconic and original offerings in a plethora of genres.

“Ingenious on so many levels. True crime meets horror meets pop culture and social commentary, circles back to full-blown horror, and BURNS IT ALL DOWN. A brilliant piece of writing.” – Alma Katsu, author of The Fervor

When Can I Read it?

The Ghost That Ate Us: The Tragic True Story of the Burger City Poltergeist is scheduled for release in July 2022.

Daniel Kraus is a New York Times bestselling author. Most recently, he released The Living Dead—a posthumous collaboration with legendary filmmaker George A. Romero, which the New York Times called “panoramic and sweeping” and the Washington Post called “the definitive account of the zombie apocalypse.”

With Guillermo del Toro, he co-authored The Shape of Water, based on the same idea Kraus and del Toro co-created for the Oscar-winning film. Also with del Toro, Kraus co-authored Trollhunters, which was adapted into the Emmy-winning Netflix series. Kraus’s The Death and Life of Zebulon Finch was named one of Entertainment Weekly’s Top 10 Books of the Year.

He has won two Odyssey Awards (for both Rotters and Scowler) and has been a multiple Library Guild selection, YALSA Best Fiction for Young Adults choice, Bram Stoker Award finalist, Scribe Award winner, and more. Out now is They Threw Us Away (Holt, 2020) and The Autumnal (Vault Comics, 2020). Kraus’s work has been translated into over twenty languages.