Excerpt from Freud: The Penultimate Biography 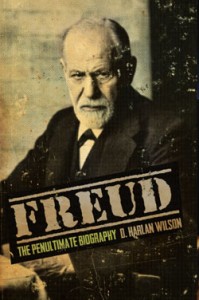 Excerpt from Freud: The Penultimate Biography by D. Harlan Wilson

I spent years with Tibetan monks so that I could learn how to lower my pulse rate to zero and effectively stop my heart from beating. After awhile people thought I was dead and tried to bury me. Hence the expression: “Everybody’s gravedigger.”

I told Dad to take it easy and he reluctantly acquiesced, but he had already informed the neighbors of my demise, and they showed up with shovels and expected a funeral. So I borrowed somebody’s shovel and dug my own hole and got inside and pretended I was dead and everybody gathered around me and shoveled some dirt on me and prayed and paid homage.

This experience lacked interpellation altogether. Almost everybody had nice things to say during the ceremony, and the ones that didn’t say anything nice really made an effort to conceal their enmity. Afterwards I climbed out of the hole and took a shower and we had drinks and I even told the people who didn’t like me that they could hang around for awhile. All you have to do with me is make an effort and I’ll usually forgive you for your kindhearted animosities, your lukewarm aggressions.