John Edward Lawson will participating in the Bizarro Across America book tour this September. Here is the official press release:

In September 2014, the writers, artists and co-conspirators of the Bizarro genre are coming to Virginia, Maryland, Pennsylvania and New York, to spread the gospel of Bizarro Fiction to new audiences and die-hard fans.

BIZARRO FICTION is a fast-growing underground genre of high weirdness, with over 100 titles in print from ERASERHEAD PRESS, RAW DOG SCREAMING, BIZARRO PULP PRESS and others.  It’s been described as “the genre of Anything Goes” and “the literary equivalent of the Cult section of your video store, back when there were video stores.”

The BIZARRO ACROSS AMERICA TOUR will feature readings, performance and odd behavior from some combination of: 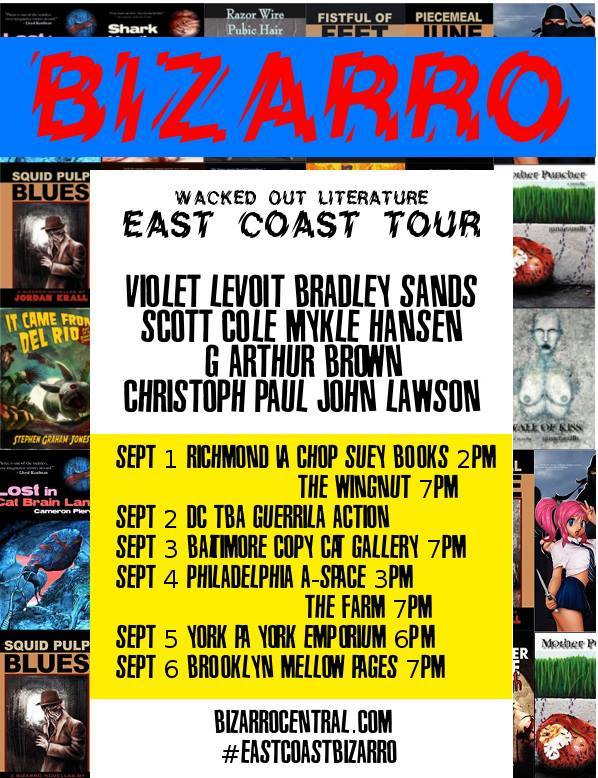 Bizarro is the genre of the strange.  The stories and poetry of Bizarro are often provocative, usually funny, always outrageous.  Even though the Bizarros are underground cult outsiders they still have gained great respect in the publishing industry, having been praised by the likes of Chuck Palahniuk, Christopher Moore, William Gibson, Jonathan Lethem, Piers Anthony, Cory Doctorow, Poppy Z. Brite, Michael Moorcock, and Charles de Lint, to name a few, as well as the publications Asimov’s Science-fiction, The Magazine of Fantasy and Science-fiction, Fangoria, Cemetery Dance, Publishers Weekly, The Washington Post, The Guardian, Details Magazine, Gothic Magazine, and The Face, among many others. Bizarro books have also been finalists for the Philip K Dick Award, the Bram Stoker Award, the Rhysling Award, the Wonderland Book Award, and the Pushcart Prize.