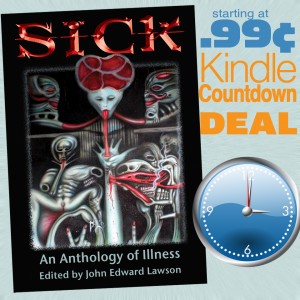 Buy the eBook edition of Sick: An Anthology of Illness on sale at Amazon.com

From the Back of the Book

Here the pen is not merely mightier than the sword; it is a plague heralding the apocalypse for convention, writing a dirge for complacency. Sick is an anthology compiled by editor John Edward Lawson.

Themes explored are physical, mental, and societal in nature. These Sick stories are horrendous, hilarious, and stupefying dissections of creative minds on the scalpel’s edge.

What They’re Saying About Sick

“Stories by Harold Jaffe, Greg Beatty, Earl Javorsky, Brandi Bell, Kevin L. Donihe and satan165 (hilarious stuff) all display the combination of inventiveness and professionalism needed for success in this gray area of prose. Many of the other authors show outright genius…readers will be floored by it and think it a monstrous leap forward…and appreciate the breathtaking, exhilarating and often diabolical machinations of the human mind.”
—Absinthe Literary Review

“Now I ask you, with so much going on in the world today and horrors revealed daily on the evening news, is it still possible to shock the apathetic and indifferent? After reading this book all I can sum up is, “Hell Yes”! In fact, let me back up that statement with the admission that I was physically ill not once but twice during my visit into this world. This is not your typical run-of-the-mill scare here kiddies. In an arena created with mayhem and anarchy, Lawson makes sure to not only make you tremble with fear; he’s going to make you beg to be released.

“Bringing together a stellar collection of writers to assist him, Lawson annihilates the standard. With thirty-six stories revolving around the abnormal, the insane and the alluringly repugnant, I warn you—you will find no comfort here…Adding their own piece of flayed skin to an overpopulated pool of horror, each author and story adds a new perspective. This collection confirms my theory that should horror writers not be permitted to write out their therapy, they might have been highly successful serial killers.

“What makes a compilation like this stand out is the distinctive angle of each story. From one tale to the next, you’re never really sure where you’ll end up. From the quietly haunting to the appallingly shocking, this book keeps you on your toes and your mind in chaos.”
—Horror-Web

“Recently-launched Raw Dog Screaming Press is out of its cage, and the publishing world is going to have a hard time getting a muzzle back on this beast. Launching last fall with Harold Jaffe’s 15 Serial Killers, the fledgling press gave fair warning that Raw Dog wasn’t going to be your average kibble.

“Now, with the publication of Sick: An Anthology of Illness, Raw Dog is losing its puppy teeth, and backing up its initial bark with hefty dose of bite. Edited by John Edward Lawson, this collection of thirty-six short fictions ruminates on pestilences of all shapes and sizes, the majority featuring strong offerings from the experimental holding cages of the horror and sci-fi undergrounds.

“Here you’ll find not only a mini-sampler from Jaffe, but compelling work by Michael Arnzen (whose 100 Jolts will be Raw Dog’s next offering), the ghoulishly-brilliant “1.01-1.03″ image-text series by Andi and Lance Olsen (reprinted here from Fiction International’s “Ecstasy” issue), and shorts by Vincent W. Sakowski, Kevin L. Donihe and Jack Fisher that are all worthy of the solid underground following they’ve built for themselves. Emerging writers Brandi Bell, Jonathan William Hodges, C.J. Henderson and Claudette Rubin pock the collection with their own special sauces.

“Full-blown literary botchulism. Catch it for yourself.”
—Trevor Dodge, author of Yellow #10

“Sick is just that—sick; a madman’s demented fever-dream. Sometimes funny. Sometimes horrifying. Always engaging. This is dark fiction on the edge.”
—Brian Keene, author of The Rising, Terminal and Fear of Gravity

“The themes and execution of the stories in Sick display a sort of existential splatterpunk sensibility. Brainy and brawny, the authors and artists collected herein explore illness, not only of the human body, but of the body politic, societal structures, and consumerism. These explorations reveal the latent inner illnesses in us all…the themes and tales in Sick churn in on themselves and intertwine with each other, showing not only ill effects, but the long-reaching effects of illness. Curl up, brew yourself some broth, and enjoy this rich collection—but do keep a barf bag handy, just in case.”
—Forrest Aguirre, editor of the Leviathan series

“What the hell were you people thinking sending me this odious, perverted and outlandish (but nonetheless beguiling) anthology of lunacy and smut? I should sick (no pun intended) Homeland Security on you for this obvious act of guerrilla terrorism(s). To cover your asses, I suggest you slap a stamp on the cover that reads: “SURGEON GENERAL’S WARNING: Reading this book may cause mental deficits, breakdowns, manias, and could induce the reader to grope strangers and utter sexual innuendoes at inappropriate public venues.”
—Michael Hemmingson, editor of What the Fuck: The Avant-Porn Anthology and author of My Dream Date (Rape) With Kathy Acker