As part of the blog tour for Steel Empires Book 3: Steel Blood, author J.L. Gribble has dropped by to give RDSP readers a backstage pass to what it takes to write a series on a regular schedule, along with a few clues to what’s coming up next. You can find information about the next blog tour stops on her blog.

In the past few months, since the official announcement of Steel Blood, people keep congratulating me on finishing my book trilogy. While many fantasy series do typically come in the three-story arc, I’ve got good news for you, kids.

The Steel Empires series is far from over. 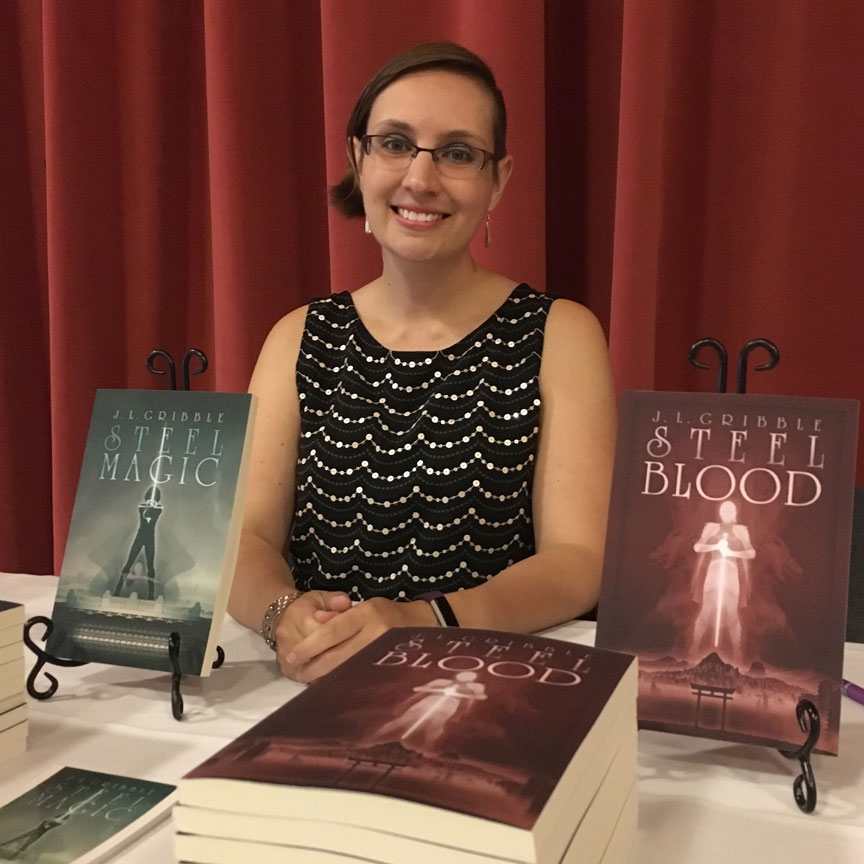 Part of what attracted me to Raw Dog Screaming Press/Dog Star Books as a publisher is that they were willing to take risks on the unknown. Not just unknown authors, which I certainly was, but also going against the grain of what is traditionally expected of particular genres. Urban fantasy books feature first-person point of view stories where the fantastical is separate and usually hidden from contemporary society. Steel Victory is definitely none of those things. And fantasy books come in sets of three. At the moment, I’m planning at least seven books for the entire Steel Empires arc, as long as RDSP will have me along for the ride.

While Steel Empires Book 1: Steel Victory works as a stand-alone novel with two major (third-person!) points of view, Steel Magic and Steel Blood split those characters up for their own adventures. Though both act as a continuation of the events in book 1, the fun thing about these two novels is that they completely overlap! Steel Magic forces Toria and Kane to grow up, without the support network back home in Limani. Steel Blood, on the other hand, also shoves Victory out of her comfort zone. She and Mikelos are headed out of Limani as well, off on their own adventure in yet another of the major empires featured in my alternate history universe.

I could go on for longer about why you should give Steel Blood a chance, or even the entire series if you haven’t started yet. But I’m here for the state of the series as a whole, not just one particular installment.

I always knew that the endless interviews and media tours that actors do for their newest hit films were difficult. But I have even more respect for them now that I know they are usually doing these tours months after they’ve finished work on the film and have moved on to a new project. Part of the nature of reliably producing a book series with one installment a year is also staying ahead of the game. I’m excited for this blog tour, but at the same time, Steel Blood is no longer an enormous part of my life.

I actually submitted the first draft of Steel Blood to RDSP over a year ago, soon after Steel Magic was released. I’ve spent the past year working on the fourth installment of the Steel Empires series, Steel Time. Even that has already been submitted to RDSP, and I started writing the first draft of Book 5 at the beginning of this month.

Writing one novel per year, with a day job and some small modicum of social life (along with a Netflix addiction) requires hard work and dedication. I can (and definitely do) continue to experiment with genre conventions in this series, but there are limits to how far down the rabbit hole I can go. Because it’s not really writing a novel in one year: it’s actually closer to writing a novel in 5 to 6 months, then using the rest of the time to get feedback from beta readers and make revisions. Which means that all writing time is sacred, and requires an extensive scene-by-scene outline before I start a single word. This includes information about setting, characters, and world-building that I have to get “right” as early as possible in the process.

So, I would love to talk to you about Steel Blood. It’s got feminist weredragons, cranky old werewolves, and Victory being awesome—everything necessary for a nontraditional urban fantasy. You can follow along with the blog tour for more information, including guest posts about world-building and my fantasy inspirations, author and character interviews, and excerpts from the novel. The book itself will be released tomorrow, July 19, available in hardcopy and ebook form.

But I’d also love to talk to you about Steel Time, the book I just finished, which includes time travel, nerdy elves, and Toria finally getting her groove on. Make sure you come back next year for the second annual State of the Empires for the full scoop. Meanwhile, I have automatic weapons and angelic powers to research as I start Book 5.