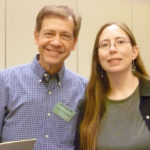 Raw Dog Screaming Press (RDSP) is thrilled to announce another book deal with Albert Wendland, author of two science fiction adventure books under their imprint Dog Star Books, The Man Who Loved Alien Landscapes and In a Suspect Universe.

The new book under contract, Temporary Planets for Transitory Days, is a poetry collection. Wendland’s main protagonist, space explorer Mykol Ranglen, has left behind a journal full of poems and they are published for the first time.

In his science-fiction novel, In a Suspect Universe, Ranglen often had with him a small notebook which he showed to no one. During the story, another character snuck a peek into that notebook and found poems, several fragments of which were given in that novel. Ranglen never spoke of what the notebook contained or what it meant to him. But Temporary Planets for Transitory Days IS that notebook. It’s a collection of the private statements of Mykol Ranglen—his world, his adventures, his past, his dreams, his regrets, his longings—the wonders he’s seen and the heartbreak he’s felt. Here, for the first time, those poems are revealed.

“One will know a lot more about Mykol Ranglen and his future world after reading the poems,” Wendland said. “Many notions raised in the previous books will be clarified, while just as many further questions and mysteries are introduced. And some poems, given only in fragments in the earlier two books, are here presented in their complete forms. It’s been a pleasure writing the work. I’ve never felt so close, or so lost, in a created character before. It’s been a great creative exercise plotting out the byways of a character’s past, as well as the longings and hopes for his future. I’ve been on a writer’s new kind of adventure—presenting an imagined world through equally imagined eyes. Placing a fictional science fiction into an equally science-fictional frame.”

We’ll see the grand vistas and galaxy-wide subjects of science fiction described from a personal point of view, through the eyes of a character who’s lived through two novels already (and who will appear in at least two more). These poems link to his deep past, to old planet Earth and the worlds of his present, to the stories we’ve seen and the stories yet to be told. Secrets are revealed, known characters explored, settings opened, and mysteries explained or made more complex.

The poems of the book (almost 90) are grouped under seven headings:

In the introduction to the collection, Wendland wrote about the poems and author but he’s staged it as penned by a faux editor of his creation as part of the project, a character that’s a publisher who’s had a chance meeting with Ranglen. The character of Ranglen supposedly hands him his notebook filled with handwritten poems. He never saw Ranglen again (only working through an agent).

He speaks of Ranglen within the intro:

“Indeed, in recent years, there’s been no trace of him (Ranglen). He’s known for long voyages into space, reputedly alone, so we assume he’s somewhere traveling now, exploring, seeking, maybe encountering more of the majestic interstellar marvels he writes about. I hope he is. From all he’s said it’s clear he’d rather be ‘out there’ than on one of our more crowded domestic worlds.”

At RDSP, we hope that’s enough to tease the possibilities of this collection and what it has to offer – whether you’ve read the first two books and it fills in gaps as a welcome addition – or if you like science fiction poetry and it makes you curious to read the other books in the Ranglen series.

“Working with Raw Dog has been more than a pleasure,” Wendland said. “John and Jennifer are a delightful mix of publishing professionalism and ‘down-home’ common sense. Their gentle help and thoughtful guidance are based on a love and respect for the medium—for solid narratives, for new forms and break-through styles, for literature ‘on the edge,’ and yet always, at the same time, for straight-forward and entertaining story-telling skills, for making compelling books that will transport readers to other worlds and futures (Dog Star) or to the deep hearts of terror (Raw Dog). They’re a delight to deal with. I called them ‘writers’ angels’ in the acknowledgements for a previous book, and I repeat that here. They ‘rock the book,’ in their own supportive and splendid way.”

About Temporary Planets for Transitory Days –

All in his words.

The collection is set to be published in the summer of 2020. You can check out the first two books at the links on RDSP’s site or on Amazon: The Man Who Loved Alien Landscapes and In a Suspect Universe.

Albert Wendland has made a career out of his life-long interests in science fiction—and photography, art, film, and travel. He teaches popular fiction, literature, and writing at Seton Hill University, where he has been director of its MFA in Writing Popular Fiction (the program famous for its exclusive attention to genre writing). His SF novel, The Man Who Loved Alien Landscapes, was a starred pick-of-the-week by Publisher’s Weekly, and the prequel, In a Suspect Universe, was published in 2018, describing a story from the protagonist’s past. He’s also written and published a book-length study of science fiction, a chapter in Many Genres, One Craft, a poem in Drawn to Marvel: Poems from the Comic Books, and several articles on SF and writing. He enjoys landscape photography, astronomy, graphic novels, and the “sublime.”