Q: What scares you?

Most things scare me, to be honest. But not in the way that has me leaping into bed so the monster beneath can’t grab my feet, or trying to outrun the imaginary muggers on a nighttime trip to the liquor store. (Though, both do happen from time to time.) I’m scared of horror movies, heights, meeting strangers, my finances, getting accidentally knocked up, of men leering at me in the checkout line—like I said, everything—but I take all that fear and use it as motivation to be a braver, more self-aware person. Sure I’m scared, but that’s what makes taking risks so much fun!

Or if you wanted a simpler answer, millipedes. Millipedes scare the hell out of me. 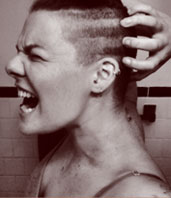 Q: What is it about Horror that attracts you to it?

Horror is the most accessible emotion, in my opinion. Because of its numerous varieties and its ability to transcend genres, you can incorporate horror into all kinds of stories, even if your intent isn’t to give someone nightmares. There’s horror in being a twelve-year-old girl crushing on a sixteen-year-old boy. There’s horror in discovering a new planet, in getting divorced and having sex and, of course, all throughout history. So I guess I’m attracted to horror’s versatility, and how it manifests in different people. Will this character curl up in a ball and avoid the big bad monsters, or will fear inspire her to stand up and fight? I could write a million horror stories, and it would never get boring.

Q: Talk about a woman in horror who has influenced your own work.

I’d be remiss to give any answer before Anne Rice. I read through the Vampire Chronicles and Mayfair Witches Trilogy around the time when I started writing seriously, so she had an enormous influence on me. Her settings were so well written, and her histories so well conceived, I’d shrug and say, “Yep, she’s giving birth to a full grown man descended from an ancient race called Taltos. I buy that. Totally plausible.” I wanted to write like that, and I’m still trying my damnedest!

Q: Are people ever surprised to find out that you’re involved with Horror? If so, how do you handle that?

Not as much these days, but people used to be really shocked, especially if they were meeting me in person. While I’m a little rough around the edges and fond of cursing, I’m also a smiley, optimistic person—sometimes, annoyingly so. I love to celebrate life, play in fiction, and generally have a fantastic time. So, yeah, I have gotten some priceless looks when I’ve said, “I loved crushing a stripper with a malfunctioning pinsetter in my novel.” Oh, and I handle it by laughing my ass off.

Dreams, conversations with my husband, and a dude named Sully who lives in the Shady Brook Metro station who exchanges original plots for Blimpies meatball subs.

Bio: Jessica McHugh is an author of speculative fiction spanning the genre from horror and alternate history to young adult. A 2013 Pulp Ark nominee, she has devoted herself to novels, short stories, poetry, and playwriting. Jessica has had seventeen books published in six years, including her bestselling thriller, “Rabbits in the Garden,” and the first two books in her edgy YA series “The Darla Decker Diaries.” More info on her speculations and publications can be found at JessicaMcHughBooks.com, on Facebook , Twitter and Google+.