COVER REVEAL: Blood of the Sun 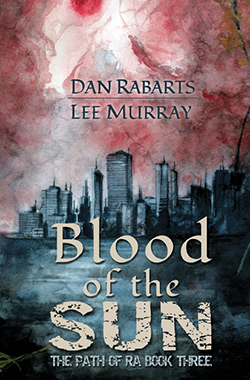 Raw Dog Screaming Press is excited to present to you the cover for BLOOD OF THE SUN, the third book in The Path of Ra series by award-winning authors Lee Murray and Dan Rabarts! The beautiful, atmospheric cover is by internationally acclaimed artist Daniele Serra. We feel it captures the mood of the story perfectly.

Take a moment to be drawn into the cover and then read on as Lee Murray explains the thoughts behind bringing The Path of Ra covers to life, including this most recent one.

Blood of the Sun comes out November 4, 2020 preorder here

The Making of The Path of Ra Covers

How the cover for the entire Path of Ra series came about:
“Daniele Serra’s artwork has graced the covers of some of the biggest names in horror literature,” said Murray. “So when our publisher Raw Dog Screaming Press commissioned the award-winning Italian artist for the cover of Hounds of the Underworld, the first book in our supernatural crime-noir series The Path of Ra, we were flattered and humbled. We already liked what we’d seen of Serra’s smoky atmospheric style. (Did I already mention that his work has appeared on the covers of some of the biggest names in horror?) Filled with excitement, and more than a little trepidation, we sent through some vague concept ideas and waited. Serra came back with an ominous near-future cityscape which stunned us. Unexpected, muted, it didn’t look like any Auckland we knew. And yet there was a quirky vibrancy to Serra’s work. Somehow, he’d captured our intent for the story in a way we hadn’t envisaged. He did it again with the sequel Teeth of the Wolf, recreating a stylised Auckland waterfront hunkering under turbulent skies, with the hint of something otherworldly in the background. We could hardly wait to see what he might do with Blood of the Sun.”

Bringing Blood of the Sun Cover to Life:

Murray said, “This time, our concept ideas included the view from the volcanic crater of Auckland’s Mount Eden (Maungawhau), the city skyline and the Rangitoto Island silhouetted against an apocalyptic sunrise in vivid orange. We sent images of New Zealand’s symbolic koru whorl, seen in the delicate coil of a fern frond and which represents life force, as well as the pink and green hues of the Aurora Australis or tahu-nui-a-rangi, the campfires of our ancestors which are reflected in the sky on winter nights deep in the South Island. (And I think we might also have thrown in a fireball, since Dan always likes to get in an explosion somewhere in our stories!)

Afterwards, when the mood-board has been sent off, for authors there is this dreadful Schrödinger’s-cat period while you wait to see how a cover artist will interpret your scrapbook of disparate ideas. If the vague ramble of words will make any sense to them. How exactly does anyone conjure the essence of a 100,00-word novel in a single image?

Of course, by now we have learned to expect something startling from Serra, and yet he still managed to surprise us. Serra’s artwork for Blood of the Sun is positively glorious. Luminous. You can almost feel the energy crackling in this image, see the rent forming…

‘Although the hour has barely gone midnight, in this other place of roaring time the sun is rising. Ra’s glow is bright and angry in the east, lifting above the horizon, the eye of the god peering into this fractured world.’ (Blood of the Sun, p.206).

Then Jennifer Barnes of Raw Dog Screaming Press added her design flair to the image to create what is simply the perfect cover to represent this final adventure of brother and sister sleuths Penny and Matiu Yee. We love it!”

Blood of the Sun Description:

There’s been a gang massacre on Auckland’s Freyberg Wharf. Body parts everywhere. And with the police’s go-to laboratory out of action, it’s up to scientific consult Pandora (Penny) Yee to sort through the mess. It’s a hellish task, made worse by the earthquake swarms, the insufferable heat, and Cerberus’ infernal barking. And what’s got into her brother Matiu? Does it have something to do with the ship’s consignment? Or is Matiu running with the gangs again? Because if he’s involved, Penny will murder him herself…

Matiu can taste the chaos in the air. All they’ve done so far is keep it at bay, but now the streets are shuddering in protest. Things are pushing up against the veil like floodwaters. The coming days promise to be dark, but there’s a bright side. He’s got this flash new car, Penny’s been too busy working to bug him, and Erica keeps scheduling their probation meetings over her lunch hour…

Join Penny and Matiu Yee for the family reunion to end all family reunions, as the struggle between light and dark erupts across Auckland’s volcanic skyline.

Dan Rabarts is a New Zealand author, editor and podcast narrator, winner of four Sir Julius Vogel Awards and two Australian Shadows Awards, occasional sailor of sailing things, part-time metalhead and father of two wee miracles in a house on a hill under the southern sun. His science fiction, dark fantasy and horror short stories have been published in venues such as Beneath Ceaseless Skies and The Mammoth Book of Dieselpunk. Together with Lee Murray, he co-edited the award-winning anthologies Baby Teeth – Bite-sized Tales of Terror and At The Edge, and co-writes the Path of Ra series. His first solo novel, Brothers of the Knife, kicks off the grimdark-yet-madcap Children of Bane fantasy series (Omnium Gatherum). Find out more at dan.rabarts.com.

The Path of Ra Series –

Hounds of the Underworld is on sale for .99 cents until 6/7/20 and is international so applies to all countries and will be available from Amazon, Apple, B&N, Kobo, GooglePlay and Scribd.

Hounds of the Underworld –

Winner of the 2018 Sir Julius Vogel Award for Best Novel

“A dark tech-noir so near to our future, it could be tomorrow, hard-boiled and hair-raising! One of the best speculative fiction novels ever written.”

Teeth of the Wolf, Book Two in The Path of Ra series –

“Teeth of the Wolf is part police drama, part crime thriller, part Lovecraftian nightmare. I loved how the cosmic horrors were partially revealed in the first book, they were there, slinking around the edges of the story, in the shadows, but they were much more in focus in this one. The veil has been lifted a bit more revealing the boiling sea, rolling black clouds, and the ancient evils clawing their way slowly into our world. The barrier between worlds is becoming so tenuous that if anyone looks too closely, they will be able to stare straight into the abyss. Rabarts and Murray really created this world full of atmospheric dread and darkness and monsters that is both terrifying yet captivating.” – Lauren Dunn