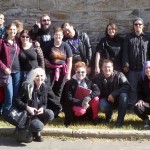 Over the years we’ve evaluated thousands of manuscripts in our various editorial endeavors, from The Dream People magazine to numerous anthologies and our publishing imprints. One thing we realized is that as editors you are never merely signed an author, you are entering into a business partnership.

We also learned the hard way that when investing a book it’s best to meet the author first. That way we ensure everybody is on the same page, so to speak, concerning the publishing process. We also make sure there’s no issue with personality conflicts, or any other potential problems.

Likewise, we feel it’s a good thing for authors to vet any publisher they might work with, and do so by meeting them in person. Second-hand accounts are great, but you know best what you want and need. If something doesn’t click with the publisher you’re better off knowing prior to being locked into a multi-year deal.

One function our yearly DogCon event serves is to provide a platform for authors to meet us. There’s still time to get tickets and join us. Of course, if you can’t make it to the Broadkill Resort you can join us for the highlights online free of charge.

You don’t absolutely have to attend DogCon5 in order to get to know us…instead you could be patient and come to one of our workshops, but they have a higher price tag.

KW Taylor came to our second Bourbon Ridge retreat, during which she had a sit down with us to discuss her writing. The result? A year later we published her novel The Curiosity Killers.

Jessica McHugh was awarded the scholarship to attend our first Bourbon Ridge retreat after we ran a successful crowdfunding campaign. The result? Next year her novel Nightly Owl, Fatal Raven will be published by Raw Dog Screaming Press.

Jim and Janice Leach also attended our first Bourbon Ridge retreat, and their collaborative poetry collection all soon be published by us.

We’ve had the pleasure of hanging out with many others at our events, many of whom we’d like to work with at some point. Some we don’t, and others still are uninterested in working with us. Not everything is about signing contracts—there is such a thing as just having a good time.

Maria Alexander? She was one of those people we just hung out with back in the early 2000s. Over a decade later her debut novel Mr. Wicker came our way, and when we published it she won the Bram Stoker Award.

Lucy A. Snyder? She was somebody who happened to be at a bookstore where we were doing an event. She asked if she could read as part of our lineup, we said yes, things were cool. Years later she put together her collection Soft Apocalypses, which won a Stoker Award when published by us.

You never know where just being cool and hanging out will lead.

The next similar opportunity is our From Concept to Market: Create a Horror Book in One Week workshop in November. While it is an online workshop, the best way to take full advantage of getting to know us is in person by reserving your room with the on-site upgrade.

What is included? You learn the secrets of the most prolific writers, editors, graphic designers, and publicists in this week-long workshop. From coming up with your idea, writing and editing, to cover design, interior layout, uploading your files, and executing your PR plan, we guide you step-by-step through the process. 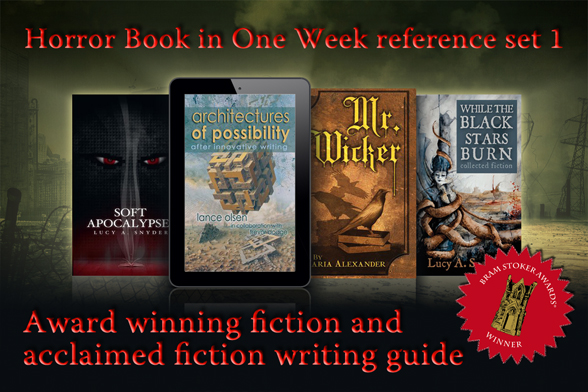