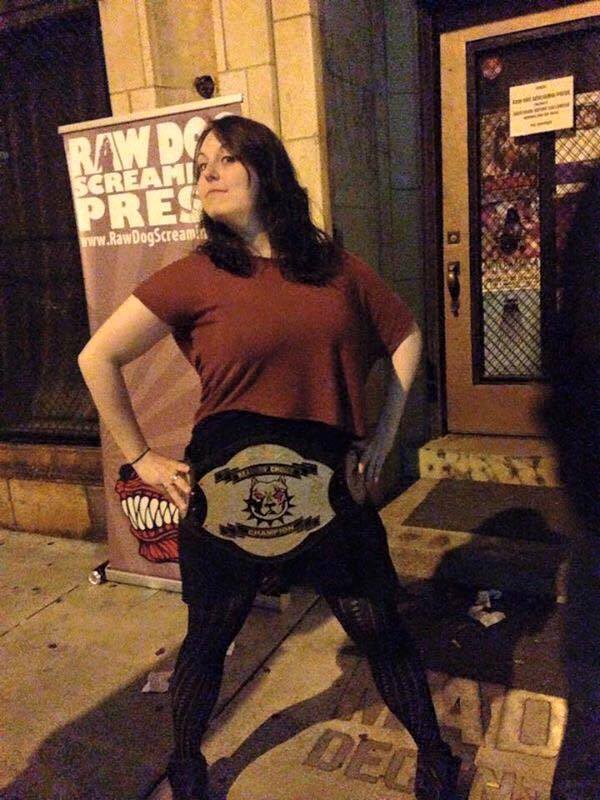 As part of DogCon IV, RDSP’s annual press party, we announced the winner of our 2nd annual Readers Choice Award. Mourning Jewelry, Stephanie M. Wytovich’s poetry collection from 2014, was the winner. We were lucky to have inaugural champion Matt Betts in attendance to pass the belt on. Last year Matt received the belt for his debut novel Odd Men Out.

As our current champ Stephanie will hold onto the belt for a year and hopefully be on hand to present it to next year’s winner. 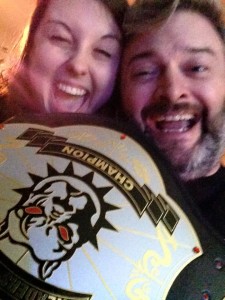 Although the judges were not able to attend we did take the time to thank both Pam Emmanuel and Daniel Haeusser for reading all five books that made it to the final round and choosing their favorite. Congratulations to Stephanie on a well-deserved win!

Pam Emanuel is an avid reader who goes through 7 to 10 books a week and doesn’t own a TV.  By day, she’s a Corporate Accountant, but by night she works on her third (unpublished) novel. The first periodically collects rejection notices and the second is locked in a disc waiting for the IT Guy to rescue it. She shares space with the Queen Diva of Persians, Greta.

Daniel P. Haeusser is a microbiologist who recently began working Assistant Professor at Canisius College in Buffalo, New York, where he mentors undergraduates both in the classroom and in the lab with research involving phage (virus) subversion of bacterial cell division. He also regularly writes and edits for the American Society for Microbiology blog Small Things Considered. In his spare time he enjoys reading all sorts of books from the dark and deviant to the latest mainstream lit, which he reviews at Reading 1000 Lives and through contributions to various larger venues. By pen, typewriter, and laptop Daniel does attempt to create fiction; someday you may actually see it in print.