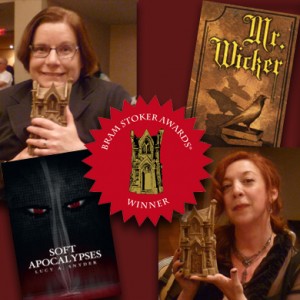 RDSP has had a few brushes with the Bram Stoker award in the past: 100 Jolts was a finalist for fiction collection in 2004, The Troublesome Amputee for Poetry Collection in 2006, Cursed was a finalist for novel in 2009 and Hysteria for poetry collection in 2013. I’d long ago learned to be happy with a release being a finalist and leave it at that. So when we discovered that 3 of our titles were finalists we celebrated like crazy! Eventually we also decided to make the trip to the World Horror Convention (our first time back in 8 years). I was excited and relieved that the books were in different categories and not in competition against each other. But, looking at the strength of each category, I had no expectations.

Maybe that’s why I had such a fun time at the banquet. The RDSP crew (Mike Arnzen, Maria Alexander, Lucy Snyder, Stephanie Wytovich, John Edward Lawson and Jennifer Barnes along with Ryan DeMoss and Michelle Renee Lane) descended en masse on William Walter, the lone person at the last banquet table and a first time Horror Con attendee. I feared for his sanity but he seemed to hold his own. We were then joined by Jeff Furlong and were soon knee deep in Manhattans and sick jokes. I was having such a good time that I wasn’t even mad (well just a little) when they ran out of dessert at the buffet.

Jeff Strand was the emcee for the awards ceremony and he had us cracking up non-stop. I loved that he produced a vomit bag signed by Michael Arnzen at World Horror Con 1995. The first category was poetry and Maria Alexander and Linda Addison were co-presenters. I was not at all surprised that the award went to Tom Picirilli. Though I would have loved to see Stephanie up on the stage for a trifecta of the most fabulous women in horror I’m still impressed that her first two books, Hysteria and Mourning Jewelry, have both been finalists. 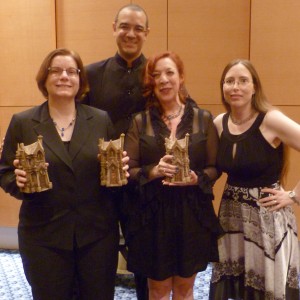 It turned out that Michael Arnzen and Michael Knost were presenting for non-fiction. When they announced that Lucy Snyder had won for Shooting Yourself in the Head for Fun and Profit (published by Post Mortem Press) I was happy for her and PMP but figured that was as close as we were coming to a Stoker. Sitting at the table with someone who wins is pretty cool!

There’s a moment just before the winner’s name is said where your mind wills the presenter to say the name you want to hear. Each time in the past it’s taken several seconds for me to recognize and process the mismatch. But in the case of fiction collection it didn’t occur to me that Lucy would win twice in the same night, so I was totally unprepared for them to call her up a second time. How often does that happen?! At that point I was satisfied, it had been a great night and to top it off RDSP could go into the history books having published a Stoker award winning book.

Then they announced the winner for Superior Achievement in a First Novel. I was so surprised I actually screamed! To see Maria walk to the stage after the 18 year journey that the Mr. Wicker project has had was indescribable. I somehow felt it all mixed up with the 12 year journey that RDSP has had, all the hard work and the ups and downs. And when Maria (in a completely unprepared speech) accepted the award on behalf of all the finalists naming each one that felt supremely appropriate. Mr. Wicker is the ultimate example of a story that would not die and symbolizes well the crooked path creativity takes, the way time and life seem to lead us astray but sometimes actually lead to astounding destinations.

Even after 10 years I still remember well the first time one of our books was a finalist for the Stoker and did not win. But if it had, would I have treasured this night as much? Would I have savored each time a book made it on the ballot? I don’t think so. Fate is fickle and life rarely follows that perfect story arc where one success leads to another bigger one, this is particularly true in the creative arts. But you also never know where your latest failure might take you. It’s possible that you might wind up one day at a banquet table sitting with good friends and 3 Stoker awards on it.