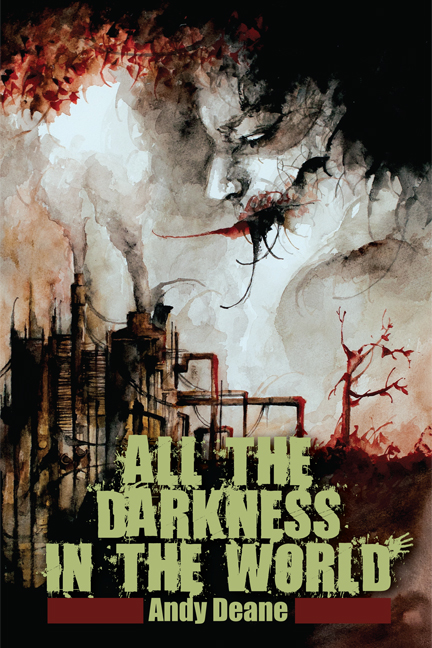 Daniele Serra’s magnificent representation of the evil smoldering in the darkness of a small town is the perfect match for Andy Deane’s slow burning vampire apocalypse.

All the Darkness in the World will debut at DogCon (free and open to the public) in Philadelphia on October 24th.

Begins with a Spark, Builds to a Bonfire

High school is hard for many but Jace has more than his fair share of troubles. It’s bad enough that his parents’ fights have become explosive and he’s the target of a bully at school but all that pales when he happens on the scene of a brutal back alley crime. Though he survives this terrifying encounter he’s left wondering and unsure about exactly what happened.

Years go by and Jace has built a simple life for himself. Finally free of his family he’s beginning to really live when a dark shadow returns to torment him. He didn’t back down from his father or the bully so he’s not going to back down now but it will take every ounce of his irreverent attitude and a healthy dose of luck to survive this time. He’s about to learn that vampires do exist and  there’s nothing romantic about them.

Italian artist Daniele Serra has created a cover that perfectly reflects the breath-taking and layered tales within. He is a winner of the British Fantasy Award and has worked with companies such as DC Comics, Image Comics, Cemetery Dance, Weird Tales Magazine and PS Publishing.

Andy Deane is a modern renaissance man, having found success as a musician with the band Bella Morte, a horror author, and as a photographer. He has recently given stand-up comedy a shot, and enjoys making people laugh uncomfortably. He was raised on a steady diet of horror films from the time he figured out what a drive-in theater was, and despite his constant ear to ear grin he never lost his love for art that dares to peer in to darker places. Andy was born in Charlottesville, Virginia and figures he’ll be buried there someday.