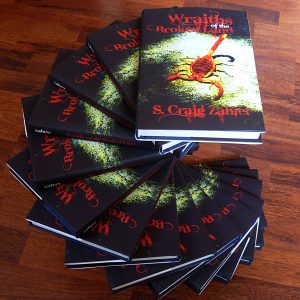 On Publishing a Book that Will be a Movie

Do you know what’s crazy surreal? Seeing something you wrote paraphrased and referenced in The Hollywood Reporter. Recently the news broke that Wraiths of the Broken Land, a novel written by S. Craig Zahler, published by Raw Dog Screaming Press, is going to be made into a movie for 20th Century Fox by Ridley Scott, Drew Goddard and the amazing team behind The Martian. We had known this deal was possible and had a little forewarning, but it didn’t prepare us for the avalanche of news that poured in once the deal was announced. I found myself reading article after article and most of them had something similar to The Hollywood Reporter’s: “[Wraiths of the Broken Land] has been described as having elements of horror, pulp and Asian ultra-violence.” Guess who described it that way? Me! In fact the whole back cover description is an argument for making the book into a movie.

“My first instinct was to tell everyone all the reasons why we don’t deserve congratulations for this.”

Surreal moment number two came when I realized who had edited the book that Ridley Scott (RIDLEY SCOTT, people!) will be directing the movie adaptation for. Yes, again the answer is me. In fact, I did the text layout too so I hope he’s happy with the paragraph kerning. OK, it’s quite possible he’ll never actually read the book but anyway… It was also thrilling to see many articles mention Raw Dog Screaming Press by name.

My first instinct was to tell everyone all the reasons why we don’t deserve congratulations for this. The first and foremost is that we had nothing to do with this deal being made. Zahler was a working scriptwriter long before we ever crossed paths. He directed his own film, Bone Tomahawk last year, and made an excellent movie while avoiding typical budget overruns and thus proved that there was an audience for extreme Westerns. Without all of that this deal would never have happened. Also, he wrote a damn good book in Wraiths of the Broken Land. All we did was publish it.

But here’s the thing, in publishing you don’t get congratulations for most of the things you do. People actually don’t congratulate you on the paragraph kerning of the interior text of that novel you just laid out, go figure! They don’t see the times when things go wrong behind the scenes and you pay out of pocket to make it right, to fix the problem print files and rush-order reprint copies. They definitely don’t congratulate you for getting the royalty reports out on time, making sure the Kindle files have chapter breaks or eliminating as many of the typos as possible (notice I didn’t say all the typos!). So I have to make a conscious effort not to turn down the congratulations but accept them gracefully as a sign that we did lots of little things right. Many people have commended our foresight and perhaps they have a point. Any idiot could have read the first 5 pages of the manuscript, like I did, and KNOW that it was a book worth publishing. But it’s also a dark and brutal book that mixes genres so few were the only ones to take the risk. And while I always thought it might be a movie that was not part of the decision to publish. It was simply not being able to turn down a good book.

I think the best way to describe this experience is being caught in the crossfire of others’ success. And, honestly, it feels pretty good to see someone work hard and reap the results. It’s even better when they take you along for part of the ride.