A Congregation of Jackals Cover Reveal 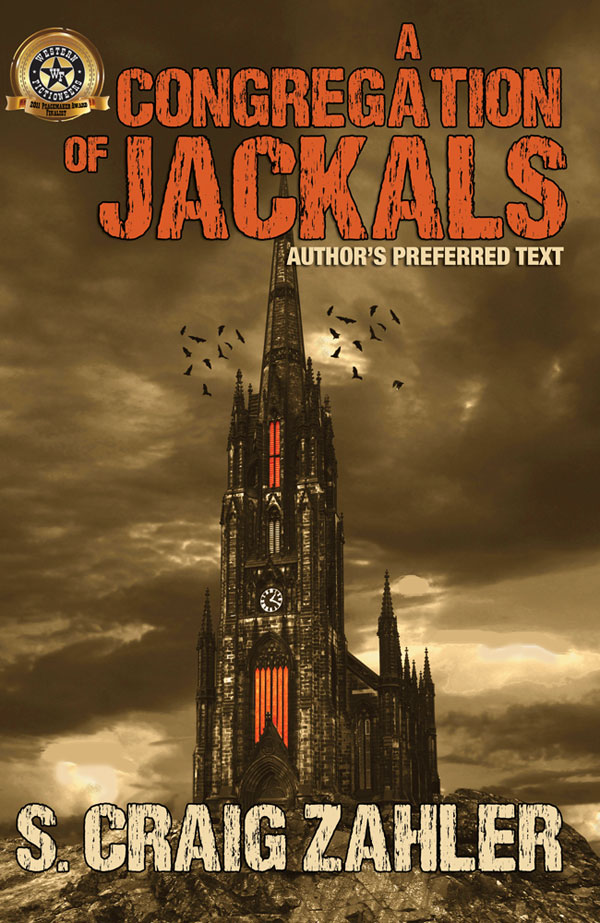 From the Back of the Book

In 1888 Oswell Danford is living a hard but satisfying life as a rancher in Virginia when he receives an unexpected telegram. A wedding invitation should be cause to celebrate but not when it means he’ll have to face past deeds that he’s deeply ashamed of.

Now he and his brother, along with their ex-compatriot, an inveterate gambler from New York, will have to travel to Montana Territory to settle an old score they’d nearly forgotten. They will join the expectant congregation at the church for the marriage of their former brother-in-arms. But while everyone else will be wishing a blissful future for the happy couple they will be praying the darkness from their past doesn’t devour the entire town. A Congregation of Jackals is an unrelenting tale of betrayal and revenge told with a precision and brutality that will leave you breathless and haunted.

Fans of Zahler’s breakout hits Bone Tomahawk and Wraiths of the Broken Land will be floored by this, originally the first installment of his western horror trilogy.

“A thoroughly modern perspective to the familiar archetypal trappings. What happens when gang meets gang…is more horrific than anything we might have imagined.
—Booklist, starred review

“A mature and thoughtful Western that can stand up alongside anything that Cormac McCarthy or Larry McMurtry have written. Its unrepentant violence, intensity, and dark worldview could appeal to fans of crime fiction.”
—Somebody Dies

“If you have a hankering for a gritty, realistic and downright thrilling Western, S. Craig Zahler is your man.”
—Jeremy Cesarec, Unbound Nook Blog

Nominated for The Peacemaker Award by the Western Fictioneers

Nominated for The Spur Award by the Western Writers of America

How You Can Help…NOW WITH FREEBIES!

There are some painless things you can do to help S. Craig Zahler, and all the Raw Dog Screaming authors…free of charge.

1) Know somebody who loves westerns, thrillers, or horror? Give them the chance to enjoy this book by telling them about it!

[bctt tweet=”This cult classic western from the maker of Bone Tomahawk is finally back in print!” username=”RDSPress”]

2) As always, I understand these things cost money just like your food and clothes. That’s why I include this link to download the free Kindle Cloud Reader for offline viewing. With it you can start reading our books in the Kindle Unlimited program free of charge, including some of those we’ve published by Zahler.

3) Sign up for our newsletter to learn about things like new books, giveaways, and more before the general public does, and be eligible for free review copies!

4) We let the news slip during our DogCon5 live broadcast that we’re upping our business game with massive innovations that some would call risky, but we like to think of as innovative. Our growth hacking efforts are due, in part, to some of the teachers at the virtual Growth Hacking Summit. Join us there! We need as many people as possible getting in on the ground floor of Raw Dog Screaming 3.0 to be part of the epic product launches we have coming. Regular online attendance doesn’t cost anything, but helps get us all on the same page.

5) Let the horror and thriller writers in your life know about our upcoming workshop, where we teach people how to write, edit, and sell a book in a week. S. Craig Zahler’s Wraiths of the Broken Lands is included in the materials participants receive. If you do so as an affiliate of ours you receive $150 for each paying student who joined through link link.

More About the Author and Western Horror

Florida-born New Yorker S. Craig Zahler worked for many years as a cinematographer and a catering chef, while playing heavy metal and creating some strange theater pieces. Zahler’s western screenplay, The Brigands of Rattleborge topped the prestigious Black List, garnering him a three-picture deal at Warner Brothers. His western horror novel, Wraiths of the Broken Land, begins production as a major motion picture from 20th Century Fox in 2017, directed by Ridley Scott and adapted by Drew Goddard. His science fiction novel Corpus Chrome, Inc. is now widely available in paperback, hardback and kindle editions as is his fourth novel, a crime story entitled Mean Business on North Ganson Street.

“[A] witty fusion of western, horror and comedy that gallops to its own beat.”
—NY Times

“…Bone Tomahawk succeeds in demonstrating the voice of its massively talented creator.”
—Twitchfilm.com

“…a most violent delight”
—Variety

In 2011, a horror movie that he wrote in college called, Asylum Blackout (aka The Incident) was made and picked up by IFC Films after a couple of people fainted at its Toronto premiere.

A drummer, lyricist and songwriter, Zahler continues to make music, and is now finishing his third album of doomy epic metal with his band Realmbuilder, which signed to I Hate Records of Sweden, after his foray in black metal with the project Charnel Valley (whose two albums were released by Paragon Records).

On Publishing a Book that Will be a Movie Do you know what’s crazy surreal? Seeing something you wrote paraphrased... View Article