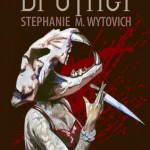 Our 4th poetry collection from Stephanie M. Wytovich will be released in May. All the poems included are exclusive to this volume and have not been published elsewhere! Pre-order HERE

Brothels are places that are constructed as—sometimes legal, but mostly illegal—houses to buy and/or pay for sex. Run by a madam, typically an older woman who houses and provides for her girls, the business attracts clients of all shapes and sizes, all genders and behaviors. Sometimes business conducts itself without concern, a steady in-and-out, a quick fuck and profit, but other times, there are problems, problems that arise because of, disobedience, greed, anger.

So what happens when a girl gets confused and she starts to like the pain? When the idea of murder turns her on and she can’t come without her knife? What happens when the masochist becomes the sadist? When the bodies start piling up? Where can she hide so she can mutilate her sex and never give herself away again?

Wytovich plays madam in a collection of erotic horror that challenges the philosophical connection between death and orgasm. There’s a striptease that happens in Brothel that is neither fact nor fiction, fantasy nor memory. It is a dance of eroticism, of death and decay. The human body becomes a service station for pain, for pleasure, for the lonely, the confused. Sexuality is hung on the door, and the act of love is far from anything that’s decent. Her women spread their legs to violence then smoke a cigarettes and get on all fours. They use their bodies as weapons and learn to find themselves in the climax of the boundaries they cross in order to define their humanity…or lack thereof.

“…a triumph of prismatic storytelling. The poems in Brothel have multiple shades and angles, and each one’s a window into a secret world I longed to explore—in spite of the bloodstains, and sometimes because of them.” —Jessica McHugh, author of The Green Kangaroo

“…at once depraved and holy, Brothel is poetry as weapon, as caress, as submission. Absolutely glorious.”—Peter Adam Solomon, Bram Stoker Award-nominated author of All Those Broken Angels

An Excerpt To Wet Your Whistle

Her favorite part of the game was initiating it; like a spider,
she lured them in, bathed in silk as she lay in wait and dreamed
about the moment when they’d be beneath her. She’d fantasize
about the second when she could bite and lick and suck and feed,
when she could unravel from her web, stretch her legs, and run,
run, run. It was a careful technique that was passed down from
madam to madam and she was practiced,
a well-trained black widow, and she counted her Johns
like she counted her bills: one at a time.

RDSP has made a concerted effort to support women in horror and we consider it one of our biggest accomplishments... View Article

Horror Novel Coming in 2016 RDSP is excited to announce that we will are scheduling the release of paperback and... View Article

RDSP signs the sequel to STEEL VICTORY Raw Dog Screaming Press is pleased to announce we have signed a deal... View Article

What is DogCon? Every year RDSP throws a big shindig to celebrate books, authors and all our supporters. It’s a... View Article

The votes are in! The readers have voted and picked the books that will go on to the final ballot.... View Article

So far we have hosted two writing retreats, both held at Bourbon Ridge in Hocking Hills, OH. I learned a... View Article

5-20-15 • Continuing a Successful Publishing Relationship Raw Dog Screaming Press is pleased to announce that it has signed a... View Article

RDSP authors and editors will be attending this year’s World Horror Convention in Atlanta, GA. Here’s our schedule for the... View Article

An Exorcism of Angels Cover Reveal

Meet Jeff Burk from Deadite Press March was Small Press Month, and during that time we ran a series featuring... View Article

Andrea Marie on Horror Q: How did you first get into acting and modeling? Which do you prefer?  I have... View Article

Omnium Gatherum Books joins us to discuss publishing as part of the Small Press Month celebration. Give a brief overview... View Article

Joining us for today’s Small Press Spotlight is Canadian publisher Dream Write Publishing. Give a brief overview of what you... View Article

We had scheduled this panel discussion in February for Women in Horror Month but it was postponed due to... View Article